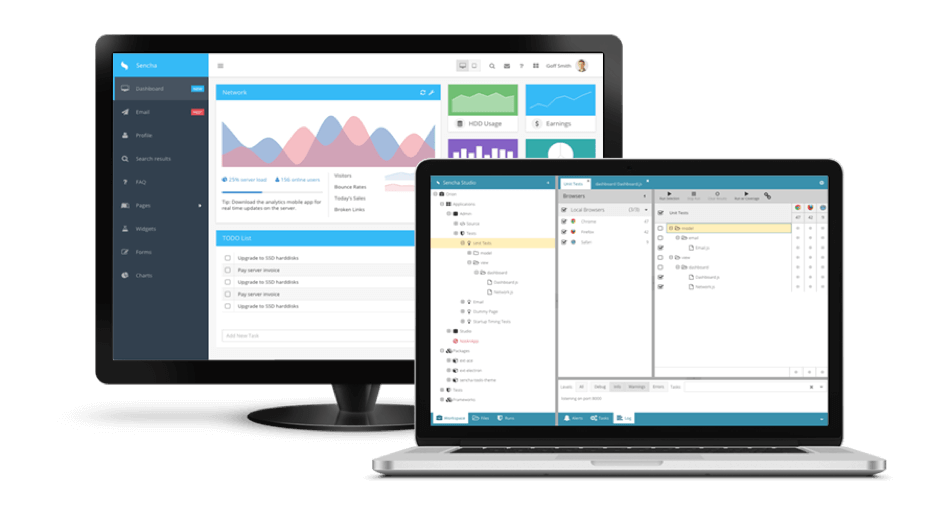 On behalf of the Sencha Test team, I’m proud to announce that Sencha Test is now generally available. Sencha Test is an exciting new product that helps our existing and new Ext JS customers to release quality applications. With Sencha Test, you can perform cross-browser and cross-platform testing using one comprehensive solution. We have brought together leading open source technologies and our in-house test expertise to create this great solution that will significantly reduce your software release cycles. We want to take a moment to thank you, our community, for your ongoing support and feedback.

See It In Action

Why We Built Sencha Test

Customers that use Ext JS and Sencha Touch to build web and mobile applications have been waiting for a comprehensive test solution that addresses their test automation needs. Web app development has gone through big changes in the last decade and so has testing. There are many different open source as well as commercial solutions available in the market, but there are none that specifically address the different components that Ext JS provides. Customers are left to cobble together open source solutions to create a test framework that becomes painful to maintain at a large scale. Testing must happen at the early stages of the application development lifecycle – with more effort on writing good tests and less effort creating and maintaining a complex third party test framework.

How Sencha Test Can Help You

Sencha Test integrates some of the leading open source test frameworks, including Jasmine and Istanbul, with Sencha built components to create one comprehensive solution. Out of the box, customers can build unit and end-to-end functional tests using Sencha Test. The seamless integrations enable you to write good tests rather than deal with integration issues or incompatibilities with an external library. It should be very simple for developers and test automation engineers to identify and write tests for Ext JS components. Using Sencha Test, you can be up and running tests in less than 15 minutes.

Software organizations have given up the traditional code-first and test-later model and are adopting more modern approaches like the Test Driven Development philosophy, which mandates that developers create the test first, based on the requirements, and then create the code to make the test “pass.” This change signifies that the industry is treating “testing” as a primary focus and is making significant changes to accommodate testing early in the product development lifecycle.

Unit testing is the first test activity performed by a software development team. Developers who write Ext JS code then create unit tests in parallel that validate the core functionalities of the feature developed. Using Sencha Test, Ext JS developers will be able to isolate the smallest unit and create unit tests and make sure that the integrated code is tested against the requirement.

End-to-end testing is another critical aspect of web application testing. Testing in isolation definitely ensures that the piece of code performs as intended, but once the application is integrated, the feature may not work due to interactions with other parts of applications and browsers that throw random failures. Using Sencha Test, test automation engineers and developers will be able to write end-to-end tests for the JavaScript code and at the DOM level. This level of testing ensures that the code has been merged properly with other parts of the application and behaves well in the browser. 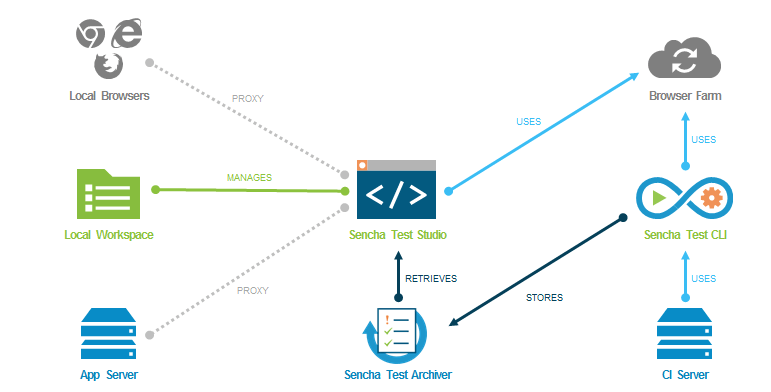 Sencha Test uses a local workspace where you can either import your existing Ext JS development project and its tests* or create a new workspace to start writing end-to-end tests for an Ext JS application, even without having access to the source code. Sencha Studio, the GUI application centerpiece of Sencha Test, will detect the local browsers and can be easily configured to work with browsers on mobile devices, virtual machines, or browser farms. It’s simple, yet powerful, interactive test runner allows developers to easily run tests on one or more of the configured browsers in parallel.

(*Note: Sencha Test runs Jasmine 2.4.1. Existing tests written with Jasmine 2.0 and above can be imported and used in Sencha Test. Please use the forum to report any inconsistencies.) 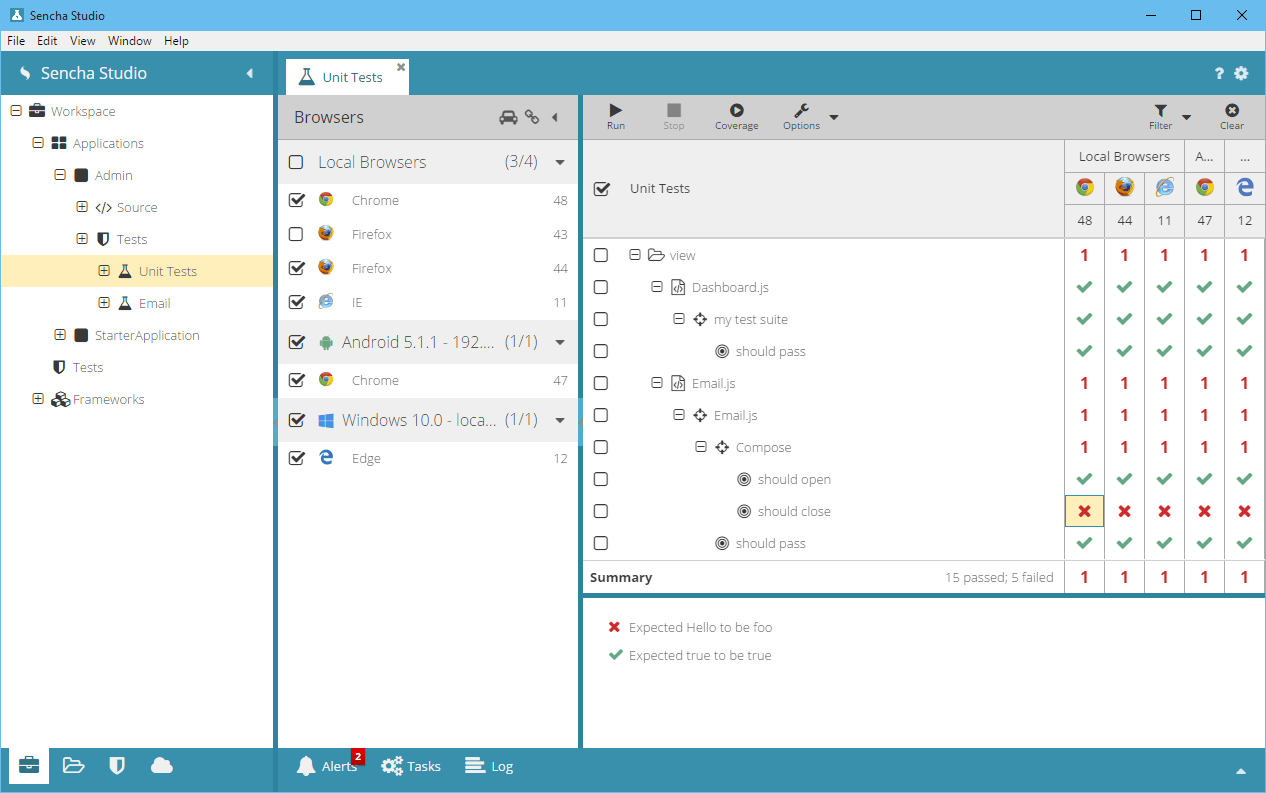 The test runner in both Sencha Studio and the CLI acts as a proxy between the browser and the application server, allowing any page to be instrumented with tests. The test runner in the CLI uses WebDriver to launch browsers and directs them to this proxy. Using WebDriver, developers have the flexibility to connect to in-house browser resources (via a custom hub) as well as third-party browser farms including Sauce Labs.

Sencha Studio supports WebDriver as well, but it can also launch locally-installed browsers without using a custom hub. This ability allows developers to gracefully debug application code, test cases, or both directly in their browser during test runs. Developers can also point other browsers, for example in a virtual machine or on a mobile device, at the Sencha Studio proxy. These additional browsers will then be listed in the Sencha Studio interactive test runner and can be used as any other local browser.

Sencha Test provides a powerful new API for test development that we call the “Futures API”. Using the Futures API, developers and test automation engineers can write compact and expressive tests that interact with Ext JS components or raw elements. For example, consider the following code:

The above code will select a grid (using a Component Query selector), then select a row by matching a field and a cell given the column id. The resulting cell is then revealed (scrolled to) and checked for desired content.

Sencha Test is a completely integrated test environment that provides an easy-to-use and comprehensive solution.

There are four main components of Sencha Test that enable you to create unit and end-to-end tests with minimal effort.

A Big Thank You

We wish to extend our heartfelt thanks to our community. Your suggestions, feedback, and bug reports have made it possible for us to deliver on the goals of this release. We’ve worked very hard to simplify Sencha Test, so you can get started quickly. We want to help you build complex tests that are maintainable and sustainable over the long term.

Download the 30-day free trial today, and share your experience and feedback in the forums. Take advantage of introductory pricing – visit our webstore.