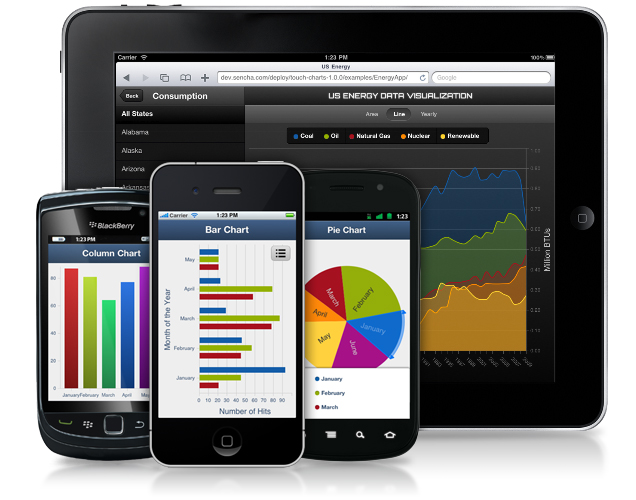 Today we’re excited to announce the general availability of Sencha Touch Charts, an add-on to Sencha Touch. Touch Charts introduces a whole new way to interact with data on the mobile web, enabling users to touch, pan, pinch and explore data all within the browser.

We launched the beta last month and we’ve received an overwhelming amount of positive feedback as people have explored Touch Charts and seen what’s possible on the mobile web. With the help of the amazing Sencha community we’ve been hard at work improving and adding to Touch Charts in a number of ways:

* Members in the forum were asking for the ability to have a default zoom, so we’ve done just that with the addition a default zoom and pan values for use with the PanZoom interaction
* One of the most fun interactions in Charts is the ability rotate the Pie series and now we’ve brought that over to the radar series as well
* Pie labels will now be hidden if they do not fit within a pie slice. In addition, pie charts can now use callouts to display labels
* While the markers on the charts were great as labels, we had a request to allow images to be used. Based on that, we’ve added a new ‘image’ marker which allows any image to be used as a chart marker

And of course, documentation: you can’t ever have enough and with the general release of Touch Charts, we’ve added a third guide, the SASS Styling Guide to help developers get started styling their charts

On top of all of this new functionality we’ve been hard at work fixing bugs, ensuring corner-cases are handled and as well making performance better across all of our supported devices. Sencha Touch Charts is now available for $99 under commercial license or for free under the GPLv3 license.

Of course we wouldn’t have been able to do this without our tireless community. From reporting bugs, to suggesting features, to submitting patches, your input has helped us build and shape Sencha Touch Charts. All of us at Sencha thank you for your help and continued support!

So download a trial, read the documentation, and get started with Sencha Touch Charts!