Over the past year, we have been listening to developers’ needs and we found that the majority of developers interested in Sencha are Enterprise Web Developers who are looking for:

We also received keen interest in Sencha’s products from Open Source Web or Mobile Developers who are looking for:

With that in consideration, Sencha’s roadmap is centered around providing you with:

Cross-platform single code base – Maximize reusability of code for building universal and hybrid web applications. No need to write multiple apps for desktop, tablets, and smartphones

Modern cross-framework components – Beautiful, themeable components with the framework of your choice. No need to rewrite hundreds of components for every new framework

Best of the web standards – Support for JavaScript ES8 and standardized web components. Keep up with changes in browser and platform technologies

Over the last few months we’ve had several exciting releases of Ext JS 6.6, with support for npm packages and open tooling, ExtReact 6.6 with support for the latest React framework, Sencha Test 2.2 release with inspect, code view, and page objects and GXT release with 100+ customer requested enhancements. 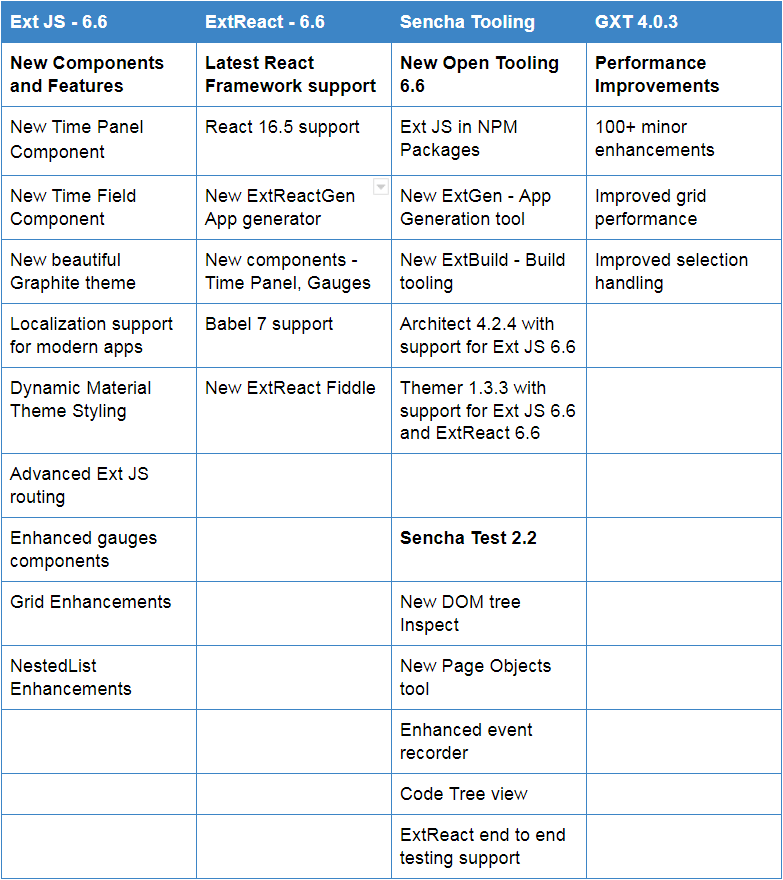 The table below provides a summary of our planned development. 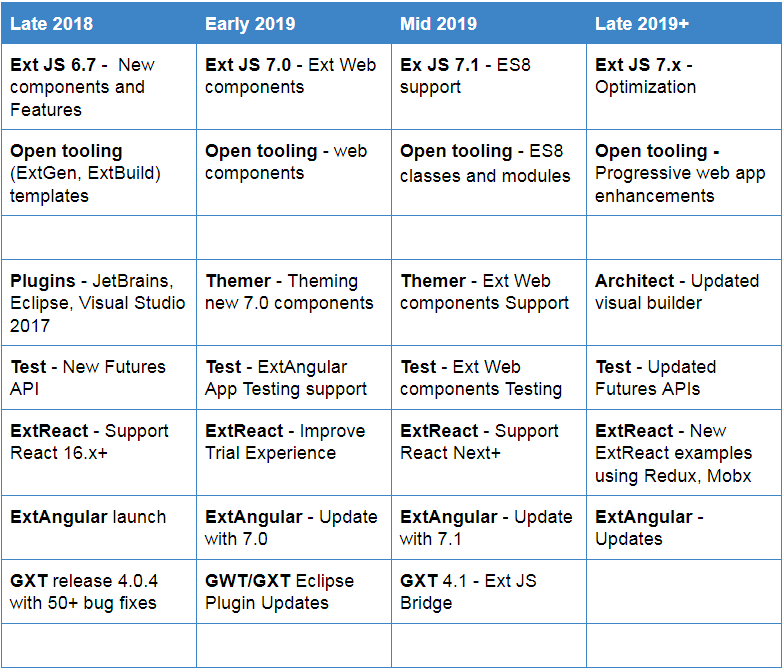 Ext JS has long been the frontend framework of choice for developing Enterprise-grade web applications. We are working actively on the following: 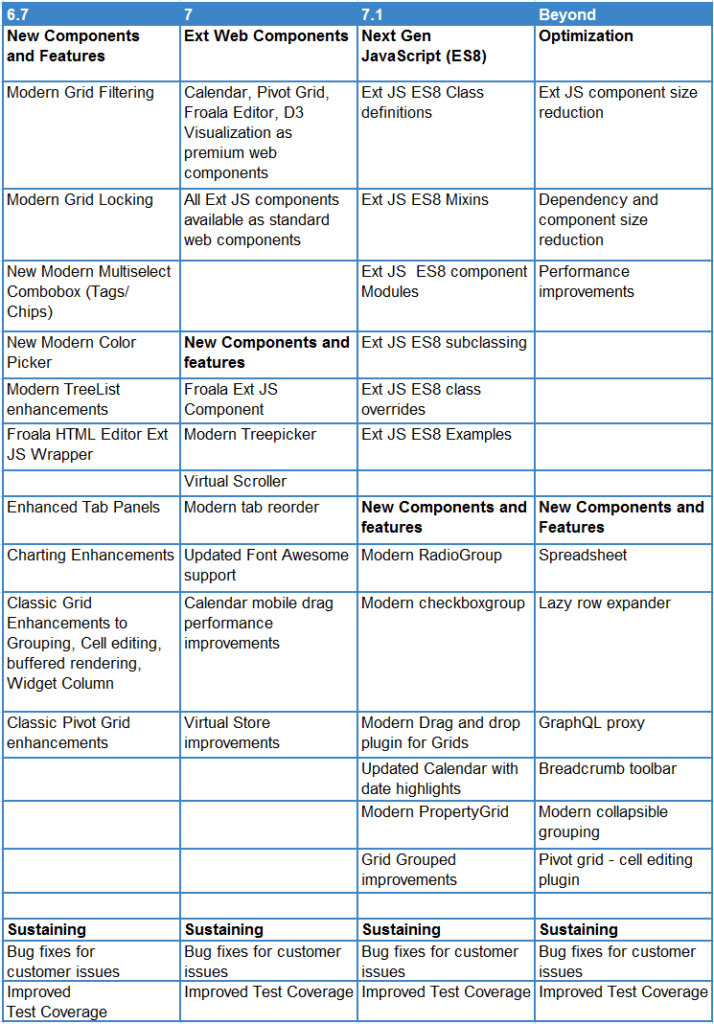 Open tooling will also continue to keep up with the latest ‘best practices’ for open tooling, such as remaining consistent with new versions of the selected tools, like webpack, babel and npm. 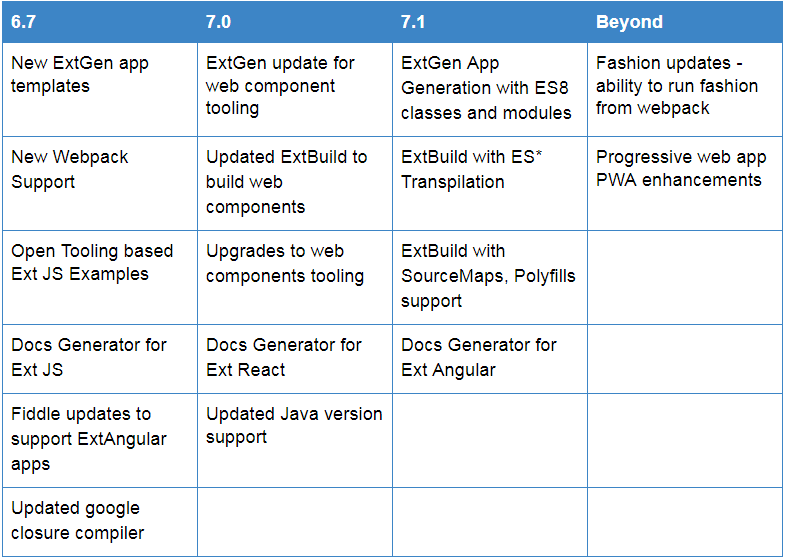 The main goal for the visual tools roadmap is to keep up with the incredible features and integrations planned for Ext JS, as well keeping plugins compatible with new IDE versions. A main focus will be around Sencha Themer, supporting ExtAngular and Ext Web Components, so you can still create beautiful themes for your applications, regardless of the underlying framework you choose.

In addition, a few long awaited features will be added to Themer, in particular, Custom Font Icons. It can be difficult adding custom font icon sets to your Ext JS applications. The goal is to make configuring your Ext JS themes to use custom icon fonts easy, as well as finally add support for changing glyph icons within the Themer application.

We are also looking at spending some effort to give Sencha Architect a much needed overhaul. One of the biggest complaints about Architect is the limitations around modifying the Ext JS code generated outside of the Architect application. The architect overhaul will likely come as a new product that will remove issues related to metadata requirement, which means you will be able to seamlessly switch in and out of this new ‘Visual Builder’ without worrying about breaking the tool. 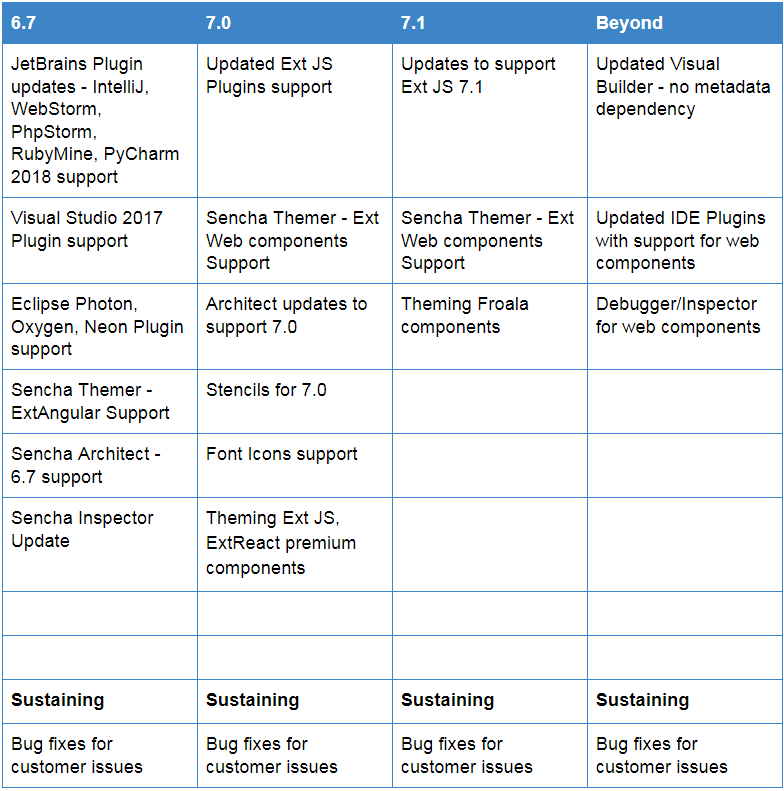 Allowing automatic minor updates to occur within the app – ensuring that our users always have access to the latest and greatest, and saving everyone the time and pain of downloading and manually upgrading their installs.

Enhancing the Sencha Test Futures API to include support for more high-level components and interactions, while keeping the ability to interact with low-level DOM elements. The event recorder will also be able to output scripts leveraging the elegance of the ST Futures API, which translates into scripts that are easier to read and maintain. 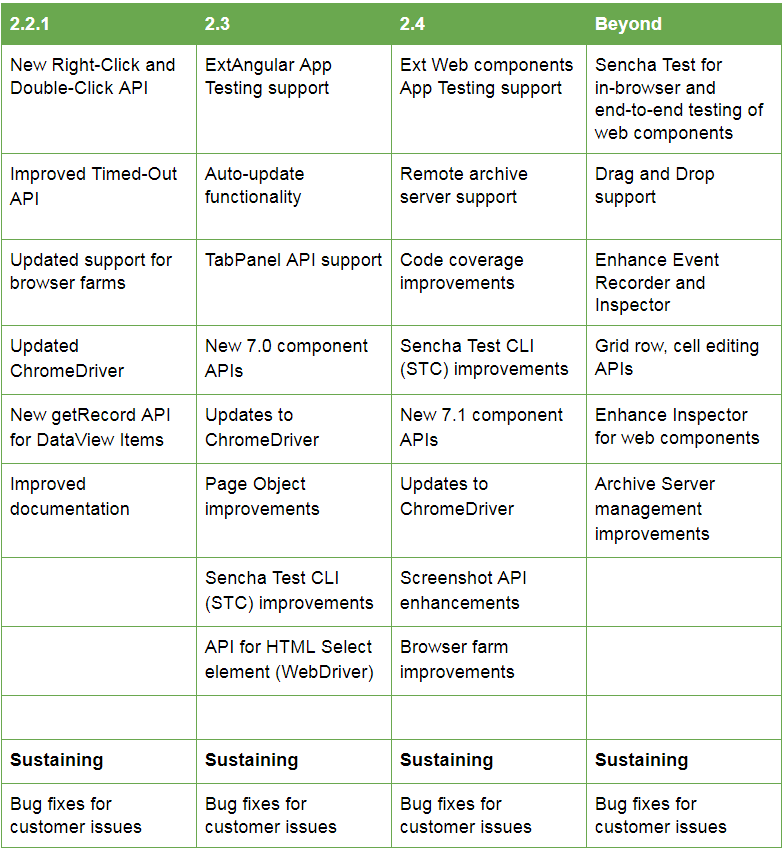 The ExtReact product is an offering for the React developer community to provide access to the Ext JS components in familiar React/JSX syntax, access to the Ext JS layout system, a component theming environment through the use of Sencha Themer, and integration with Sencha Test for the development of unit and end to end tests.

The current version of ExtReact, version 6.6, focuses on the ability to support React v16x, Webpack 4 and Babel 7, which are the latest releases of these products. ExtReact also supports Ext JS 6.6 components.

Future versions of ExtReact will continue to support upgrades to the latest React releases, as well as tooling updates and innovations. Future support for the Web Components standard is also a consideration.

The ExtAngular product will be an offering to the Angular developer community with access to Ext JS components in a familiar Angular template syntax, access to the Ext JS layout system, a component theming environment through the use of Sencha Themer, and integration with Sencha Test for the development of unit and end to end tests.

The first version of ExtAngular is currently being architected, and will appear with the release of Ext JS v6.7. It will focus on integration with the latest 6.x release of Angular, as well as tooling in the form of Webpack 4 and Babel 7, which are the latest releases of these products. ExtAngular will also support the Ext JS 6.7 component set.

Future versions of ExtAngular will continue to support upgrades to the latest Angular releases, as well as tooling updates and innovations. Future support for the Web Components standard is also a consideration.

GXT has an exciting roadmap ahead. We’re continuing to phase in better integration with our sister product, Ext JS, making it easier to interop with Ext JS. This makes it easier to write Javascript with Java, allowing you to take advantage of the rich features Ext JS has. Features like the comprehensive data charts, Calendar, Pivot grid and more. Currently the import system is harder to use, but we’ve got plans to make it even easier to use with build systems like Maven, so it’s simple to set up and use Sencha Ext JS and Froala libraries.

You’re going to see more of our examples with different configurations show up for GXT. It’s our goal to make it even easier to use GXT to write your structured web applications. Our goal is to continue to show all the potential features from the Sencha libraries you could use to build your scalable web application for your enterprise.

We’re planning on fixing over 50 issues in the next release, focused on addressing key customer issues. Our goal is to tighten up the testing and aim for better regression testing, so you have low impact on changes when you upgrade between minor versions. We want to make the highest quality Java web framework out there, aiming for better reliability and easier to use.

We won’t be stopping with just that. We will also start work on the Ext JS Javascript bridge, so you don’t have to wire up JsInterop by hand. This will make it even easier to plugin to rich features from Ext JS when you need them. We’re also planning on tooling upgrades, which we plan on enhancing so they work faster with the GWT sdk. We’re aiming to provide simple enhancements that should make enterprise development with large amounts of services even easier to do. 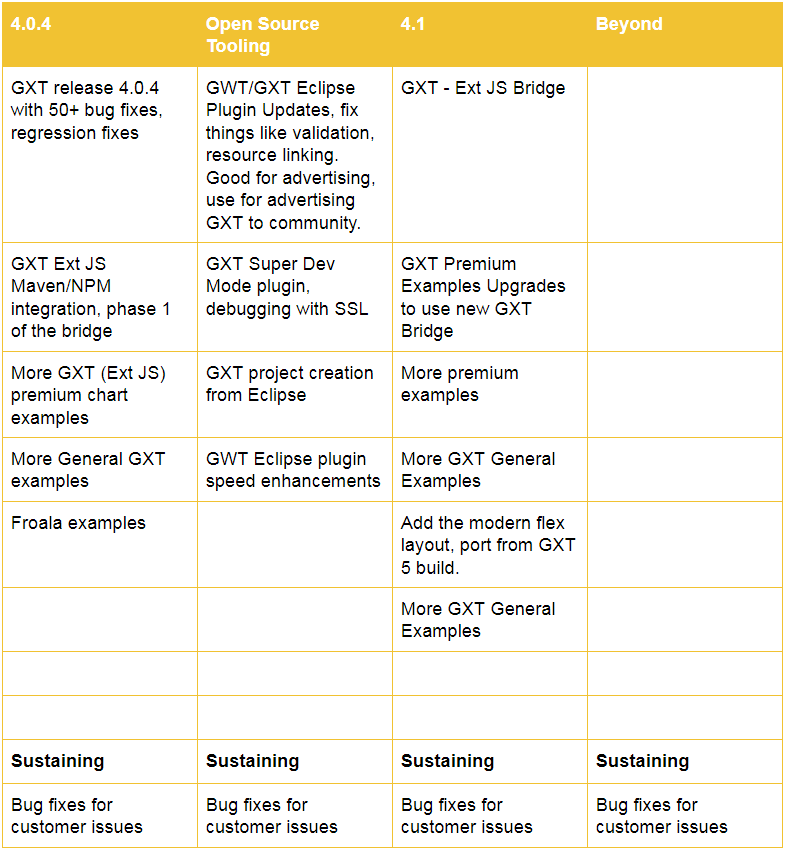 Note: These plans and roadmap represent our intentions as of this date, but our development plans and priorities are subject to change. Accordingly, we can’t offer any commitments or other forms of assurance that we’ll ultimately release any or all of the described products on the schedule or in the order described, or at all. These general indications of development schedules or “product roadmaps” should not be interpreted or construed as any form of a commitment, and our customers’ rights to upgrades, updates, enhancements and other maintenance releases will be set forth only in the applicable software license agreement.

On behalf of the entire Sencha team, we’d like to thank all of our customers and the growing Sencha community for their continued support and feedback. We look forward to our continued partnership. If you have any feedback you’re welcome to share at feedback@sencha.com.