Have you ever wanted your validation messages to appear under your form field (msgTarget: ‘under’), but found that the validation message was squashed because of the way the message only appears under the input field? Well, here’s a simple trick to fix that and use the entire width of the field and label. 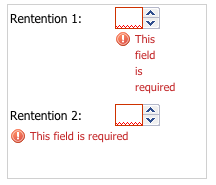 You can achieve this visual effect by overriding the error message’s styles. To apply this to a single instance of a field, simply add a cls value to the field as shown below :

Check out this Fiddle

If you are using custom build scripts to compile your application, you know that it can be a bit tedious to maintain a readable and understandable chain of commands. For example, you might have something like this:

This is a simplistic example, but you can see how it could become difficult to maintain as it grows in complexity.

Fortunately, Sencha Cmd allows you to create “response files”. These files give you the ability to maintain the commands in a separate file, which you can then tell Sencha Cmd to read in lieu of manually entering the commands in the CLI.

With this in mind, our difficult-to-maintain chain of commands above can be transformed to a response file, like so:

In the syntax of a response file, each line is interpreted as a command line argument. However, if the line begins with “#”, it is skipped. This provides a convenient way to create “comments” in your response files that can be useful for reminding yourself why a particular argument is used, or even documenting the rationale of the command chain for team members.

Now that our response file is created, using it is super-simple:

Easy, right? With very little effort, we’ve used a response file to transform a difficult-to-read command chain into an easy-to-follow format, and we can even drop this into source control now.

The {build-name} is the name that you have specified in your app.json build object.

For example, to create an uncompressed build for the build object specified above, the command would be:

This will make it much easier to debug issues you are experiencing with Cordova/PhoneGap packaged applications.