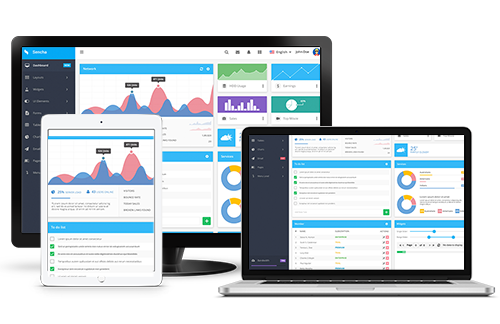 After an amazing SenchaCon 2015 last week, we are extremely excited to announce that Ext JS 6 early access release is available. With Ext JS 6, you will be able to use a single JavaScript framework to seamlessly build applications for desktops, tablets, and smartphones.

You can get immediate access to Ext JS 6, which is being developed as a unified (Ext JS and Sencha Touch) framework to build web applications using a single source and deliver them across desktops, tablets, and smartphones. With the help of our customers and the Sencha community, we will use the valuable feedback to make Ext JS 6 the best release ever.

How Do I Get Involved?

Check out the Ext JS Early Access Release, look for features that interest you, and just start playing with them. Try building a universal application for desktop, tablet, and smartphone. Get involved by giving feedback, participating in discussions, and posting screenshots — via the Ext JS 6 forums. Every developer has different interests, so it’s a good idea to look at what’s included before you jump into building your first universal application.

The Ext JS 6 Early Access Release brings a myriad of new features and tools to help build universal applications. Here are some of the most exciting ones:

Ext JS 6 unifies the Ext JS 5 and Sencha Touch frameworks, and allows you to build universal apps for all platforms and all devices. With Ext JS 5, many of the Sencha Touch mobile capabilities were brought into Ext JS, and a core common code base was created. With Ext JS 6, the UI components of Ext JS and Sencha Touch sit on top of that common core, so you can truly have a single code base and build for devices ranging from desktops to smartphones. There are also a number of enhancements in Ext JS 6, especially in the areas of Accessibility, Charts, and Grid.

We recently announced the Sencha Pivot Grid add-on which enables developers to quickly and easily add powerful analytics functionality to Ext JS applications. With Sencha Pivot Grid, you can build applications that enable users to discover critical insights from massive sets of data, helping them to harness the power of big data. With Ext JS 6 Early Access, we would like your feedback on the Pivot Grid add-on as well, so we can further enhance its features and capabilities.

With every major release of Ext JS, we update Sencha Cmd and make it easier and faster for developers to build their applications. In the past, theming Ext JS applications using Sass was difficult because of its dependency on Ruby and Compass. We have included a brand new Sass compiler called Fashion, which is our own runtime JavaScript implementation, so you can recompile Sass directly in the browser, in near real-time.

Most developers use standard IDEs (Eclipse, JetBrains, Visual Studio, etc.) as their development environments. We have created a plugin for one of the most popular IDEs, JetBrains, which makes Ext JS development much faster and easier, and significantly improves productivity. The Sencha JetBrains plugin enables autocomplete and allows developers to have quick access to configs, mixins, properties, events, and methods.

We’re working hard to release Ext JS 6 and the associated tools, and we need your help and feedback to make that happen. Try out the early access version, build your first universal application, or migrate one of your smaller apps and report bugs, issues, or errors on the Ext JS 6 Early Access forums. We look forward to your feedback.