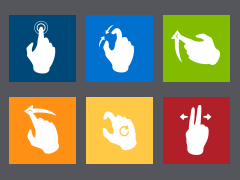 Prior to version 5, Ext JS was designed exclusively for use on desktop devices with traditional mouse input. As of version 5, we’ve added support for touch input as well, which allows Ext JS to be used on a larger selection of devices, primarily tablets, but also laptops with touch-screens. The implications of this change will likely be transparent to users of the framework, but it’s helpful to understand what’s going on behind the scenes. In this article, we’ll explore how the framework handles touch events and event normalization between devices.

Perhaps the most exciting addition to the event system in Ext JS 5 is “gesture” events. Because the Sencha Touch event system forms the basis for the new Ext JS 5 event system, Sencha Touch users may find that they are already familiar with many of these gestures. For the uninitiated, gestures are complex events that are synthesized from lower-level browser events, for example, “drag”, “swipe”, “longpress”, “pinch”, “rotate”, and “tap”. Ext JS 5 takes touch gestures one step further and allows them to be triggered by mouse input in addition to touch input, or both, in the case of multi-input devices.

From the browser’s perspective, there are 3 basic events (start, move and end) that fire when interacting with a page using a mouse or touch-screen. The framework monitors the sequence and timing of these three events to determine when a gesture has occurred:

The following “single-touch” gestures will work across all supported devices and browsers, regardless of the input device that is used (mouse or touch):

The following “multi-touch” gestures will work on all supported touch-enabled browsers when running on a device that has a touch-screen.

The Ext JS 5 event system makes a subtle but significant paradigm shift by moving away from directly attached DOM listeners to a “delegated” event model. This means that for each type of event (“mousedown”, “touchstart”, etc.), a single listener is attached at the very top of the DOM hierarchy (the window object). When a DOM element fires an event, it bubbles all the way to the top before it is handled. Internally, this complicates things just a bit, because the event system has to emulate event propagation by traversing up the DOM hierarchy from the target element, and dispatching event handlers, if needed, along the way. While, at first glance, this approach may seem needlessly complex, it bestows a few important advantages:

Potential Challenges With The Delegated Model

As with any fundamental change to the framework, it’s possible there will be incompatibility with existing code. As it relates to the new event system, existing code generally falls into one of two camps:

If for some reason, the delegated model is undesired, listeners can opt out using a simple flag in the options object:

However, caution is advised when opting out of the delegated event model, because it can produce the same negative effects (as described above) as for directly attached DOM listeners, especially when stopPropagation is involved.

One of the primary goals of the new event system is to enable existing Ext JS apps to run on tablets and touch-screen laptops (with little or no effort required to upgrade the app). In order to accomplish this, the framework performs some basic event normalization behind the scenes. When a listener is requested for a mouse event such as mousedown or click, the framework actually attaches a similar touch event or pointer event (if the device supports such events). For example, if the application attempts to attach a mousedown listener:

On Mobile Safari, the event system will translate it to:

However, when running in IE11, that same listener would be translated to:

This allows interaction with the touch-screen to behave mostly the same as mouse interaction.

The following mouse events are translated directly to touch or pointer events when running on a touch-enabled device:

For some mouse events, however, there is no suitable analog in the touch world. If an application relies on any of the following events, it is up to the developer to decide if and how the feature should be implemented when using touch input:

While event normalization will benefit most applications, there may be an occasional need to opt out. Ext JS 5 provides the new “translate” event option for this very purpose:

Setting the “translate” option to false will prevent the event system from performing any event normalization for this listener, so the handler function will only be called if a “real” mousedown occurs.

Ext JS has long been the leading framework of choice for HTML5 desktop apps, but now the lines between desktop and mobile are becoming increasingly blurred. The new Ext JS 5 event system, with its gestures and event normalization, positions Ext JS to continue to excel both on the traditional desktop-style device and in the new world of touch-enabled devices and browsers.