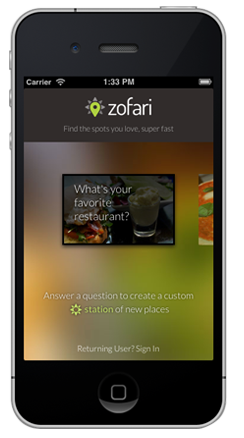 Zofari is a small, Bay Area team trying to change the way that people discover their world. We believe that there’s a growing gap between how people think of places and how those places are represented digitally. At Zofari, we’re trying to bridge that gap.

Our flagship product is the Zofari mobile app, which we describe as Pandora for places. Users create “tplace stations” based on their favorite restaurants, bars, cafes or neighborhoods. Using our proprietary recommendation engine, we show them the most similar places around them, based on familiar human notions like vibe, experience and intention. Our goal is to help people find new places they’ll love in 15 seconds or less. No reviews, no clutter, just great recommendations from a trusted source.

Why We Chose Sencha Touch

As a small, agile startup trying to quickly find market fit in an extremely competitive landscape, we have to move and iterate extremely quickly. Sencha Touch has an extensive library of native-like UI components, and easy to use out of the box dataview/model/store/proxy workflow that make it super easy and quick to prototype new interfaces and then connect them to working services. Aside from the basic navigational views, Zofari’s user interface relies heavily on swipeable carousels and grouped lists for browsing through results; simple UI concepts, but deceptively difficult to implement with a native feel. The Sencha Touch built-in gesture recognition and configurable physics make it easy to provide users with an interface they’re comfortable with. The basics of user interaction and integration with our backend have been taken care of for us, so it’s easy to get new, working features out the door and ready for testing in a matter of hours, rather than days or weeks.

In addition to getting our core functionality locked down, it’s also been key to ensure that we have an aesthetically pleasing branded user interface. With the use of Compass and Sass for theming in Sencha Touch, it’s been very easy to tweak the style of built-in components to completely transform the look and feel of our app. For example, our primary interface lets users swipe through restaurant recommendations in a carousel. We created a custom Ext.Carousel subclass and updated its styles to give a peek at the next/previous cards, as well as enable some transition effects on the active card. Toolbars and button styles were also easy to change with just a few Sass variable adjustments. Hardware-accelerated CSS3 and small but important things like icon fonts have ensured that our app performs smoothly in a mobile browser. It’s also nice that Sencha Touch reacts to quirks across legacy versions of mobile browsers and plays nicely with older devices.

Sencha Architect was super useful for us in the beginning too, as it substantially reduced the learning curve for the nuances of the various components. From initial scaffolding to packaging for deployment with Cmd, so much of the grunt work has been taken care of that it’d be tough to rationalize building a web-based product any other way.

Sencha Touch has provided significant savings to us both in terms of resources and cycles. We’re a bootstrapped startup, which means doing more with less. With Sencha Touch, we’ve been able to utilize rapid, platform agnostic development cycles, pushing more products faster than teams triple our size. Having extensibility across iOS, Android, Kindle and mobile web also opens up numerous affordable distribution channels to us, which is great for a budget constrained marketing team.

We highly recommend Sencha to any team that values rapid iteration and efficient dev cycles. It’s been and will continue to be an invaluable tool to us as we grow Zofari.