The need for browser-based test automation is hard to ignore. Enterprises are slimming down IT staff, yet these companies still need to know that the latest round of software upgrades didn’t break their business critical web-based application in Internet Explorer 7 and Firefox version 19. Having a staff of human beings manually make these determinations is time consuming, error prone, costly, and ultimately unnecessary.

Many of these companies use Selenium, which has become the enterprise standard for test automation because of its ease of use and widespread adoption, but its vision of static DOM and form-based web applications is outdated. Modern web application frameworks like Ext JS and Sencha Touch dynamically alter the DOM as the user interacts with the application, which creates headaches for Selenium.

HTML5 Robot was created to ease the difficulty in using Selenium with HTML5 technologies. HTML5 Robot extends Selenium capabilities by adding specific component lookup and interaction support for HTML5 frameworks like Ext JS 4, Ext JS 5, and Sencha Touch 2. It is also based on a series of best practices for how to reliably lookup and interact with those components in enterprise web applications. HTML5 Robot can be used as a Java framework for writing and managing test suites, or as a Java library that can be included in your own existing project.

Understanding HTML5 and the HTML DOM in Memory

Frameworks like Sencha Touch and Ext JS go beyond this simple example though. In the case of Ext JS 5, a <select /> component (also known as a drop-down or a combo box) is not even a <select /> component. If you can type into the combo box, the underlying HTML component is an input. However if you cannot type text into it, the underlying HTML component is a link (the “a” tag). For example, consider the Ext JS 5 combo box when you can type text into it:

There are a number of effective ways to reliably locate Ext JS and Sencha Touch generated components. These methods though depend on the component itself. The effective methods are as follows in order of preference:

For example, consider the Ext JS 5 Combo Box, which you can obtain by its associated form label. The only way this location expression would fail is if the text on that label were to change; this is a reasonably safe expectation given that our other options involve attributes that are dynamic the next time the page is loaded.

For example consider an XPath statement that does the following:

This also shows that you have to understand what you’re trying to interact with. The way in which you interact with a Combo Box is different from how you’d interact with a Grid in Ext JS 5. These methods of interaction revolve around the different interactable parts of a component and how to locate them. This is why HTML5 Robot has defined methods for locating components and their interactable subcomponents (See Java – Locating Components).

For example, in a Java based HTML5 Robot test that included the Ext JS 5 support class, one could get the XPath for the Ext JS 5 combo box button by using the following:

This has been done for every conceivable point of interaction for every component in general HTML, Sencha Touch, and multiple versions of Ext JS. This is a huge timesaver when writing tests, and saves even more time in the long run since these tests are fundamentally more maintainable and less likely to break.

Now that we have a solid understanding of what the DOM looks like in a modern web application, let’s take a look at an example. While HTML5 Robot usually tests against the Kitchen Sink demo, Ext JS 5 ships with an awesome new example called Executive Dashboard which simulates an enterprise application. You can also watch this video to learn how to install HTML5 Robot locally and get it running. 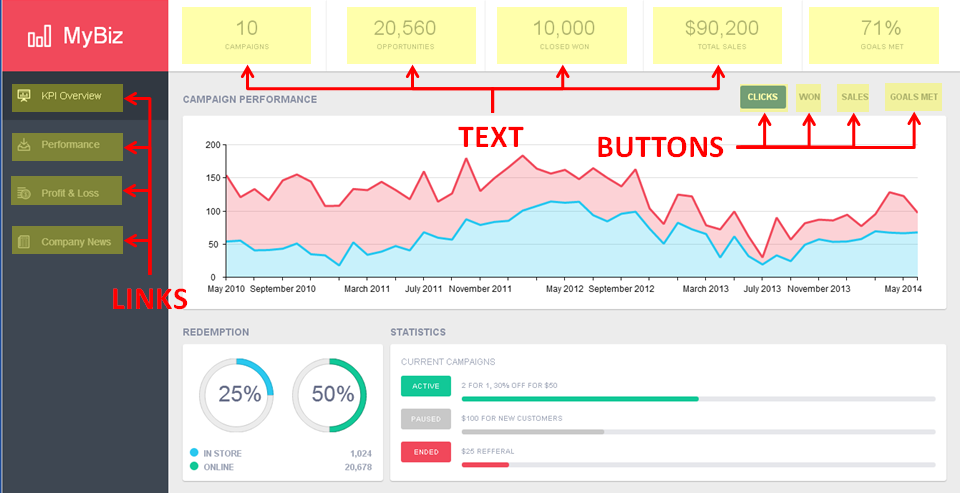 The “KPI Overview” contains links, buttons, text, and charts. The charts are based on a canvas, so if you were to interact with them, the methods would be very different than the ones used for the links, buttons, and text. The points of interaction have been highlighted in the image above.

Our first step is to create a class to retrieve the interactive components, so we’ll start by creating a Model class that extends BaseModel:

The next step is to define some constants that do the XPath lookups in the Model, which will be needed later:

Once the XPath lookups are defined, the next step is to define methods for doing Selenium WebElement lookups for these components.

The next step is to write the Base Test Class, where the purpose is to define the basics of test operations as they are likely to work in all browsers. Later, you will define browser specific test implementations in other classes. When running the test methods of the class out of an IDE like Eclipse, the tests will default to running in Chrome. The Base Test Class needs to extend the BaseSeleniumTest, which provides access to helpful utilities for simplifying typically complicated operations, such as dragging and dropping one WebElement onto another. It also instantiates the BaseModel as well as handles the actual test execution.

Notice that the test is JUnit-based, and as a preference I like to use Hamcrest in order to handle assertions. I find that statements like “Assert that X is Y” using Hamcrest are easier to read than the JUnit asserts like “assert that Y is expected from X”. You could use the standard JUnit “assertEquals” in place of the “assertThat” statements.

In any test, the first action is to open the URL to be tested. Another aspect of any test is that you need to wait on something that is deterministic to know that the application is in a state where you can interact with it. A good way to do this is to wait for some element on the page to be clickable, in this case waiting on the “KPI Overview” link to be clickable will work.

Open the URL sized for full screen, and wait for the “KPI Overview” link to be clickable

At this point, it is a good idea to start verifying some of the expected displayed data. For the KPI Overview, you can assert the expectations for the values at the top of the page listed for Campaigns, Opportunities, Closed, Total Sales, and Goals.

We can then begin clicking on the options available to us, starting with the “WON” button.

In an IDE like Eclipse, you can right-click on the test method declaration in the code, select “Run As -> JUnit Test”. The result is that the test method will be executed against the default browser, which is Chrome. If the logging settings are set to Debug, you will also get console output specifying the XPath that was used for component locations. 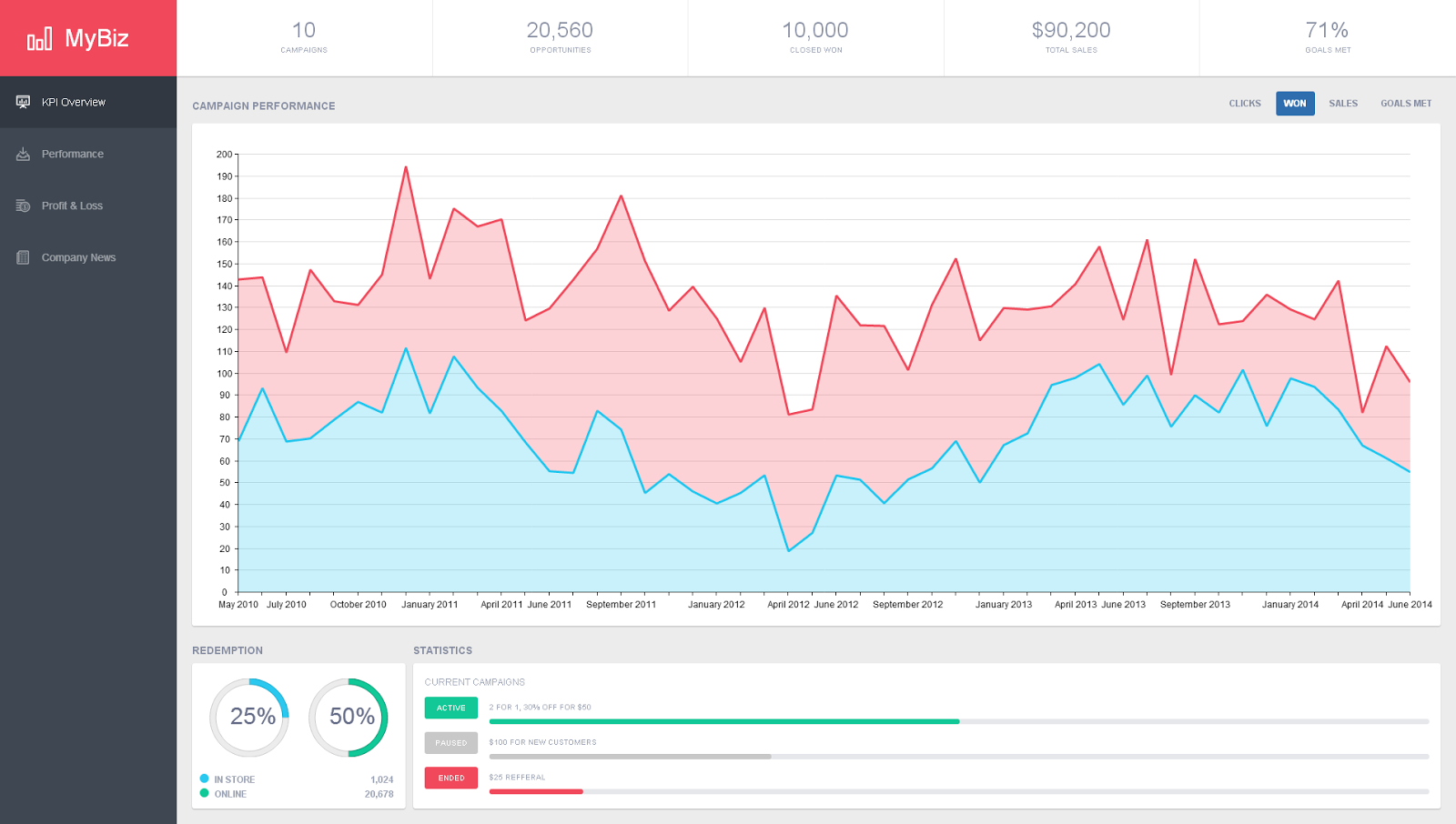 Testing in Other Browsers

For example if you wanted to run the test in Firefox:

Right-clicking on any of these test classes in the Eclipse IDE and selecting “Run As -> JUnit Test” will run the test in the appropriate browser, as specified in the class-level annotation. An important point is that the exact browser to be used is the one that sits on the computer you are using. If you want to run your tests against Internet Explorer 8, the machine running the test must have Internet Explorer 8 installed.

The future is HTML5, and Sencha is leading the way to that future with Ext JS 5 and Sencha Touch 2. Selenium is great, but it has a hard time keeping up with the amazing things HTML5 applications can do. Even being an expert in HTML DOM component location, one still has to define all of the possible methods for interacting with those components in a specific technology like Ext JS 5. HTML5 Robot not only provides the ability to interact with Ext JS 5 out-of-the-box, it provides the enterprise with a series of best practices for quickly creating maintainable and reliable browser-based tests through Selenium. It also comes with support for the major browser drivers, including Chrome, Firefox, Internet Explorer, and Safari. This support includes advanced behavior such as taking screenshots, drag and drop, and conditional wait expressions to handle the highly asynchronous world of HTML5. For more information about integrating HTML5 Robot into your project, check out our video.