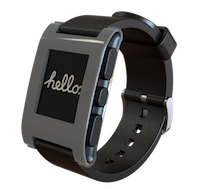 The number of wearable devices sold globally, according to Juniper Research, was around 27 million units in 2014, likely to increase to 127 million units by 2017, along with estimated revenues to exceed $53 billion in 2019. With wearable devices becoming significantly more commonplace in the coming years, there’s a whole new platform on which to develop apps.

For mobile phones and tablets, it’s fairly simple and consistent to develop apps, because the same constants usually apply: the end user has a relatively large touch screen surface, with a soft keyboard, and a powerful webview for rendering the app.

The problem is that there are so many different types of wearable devices (e.g. smart watches, smart glasses, fitness trackers), and there’s a a lot of variation in the types of interfaces used to interact with these devices (e.g. voice interactions, tiny touch screens, light vs. hard touch screen presses, specific hardware buttons, and more), that there is no standard way to develop apps for all wearables.

So the question is: how can we easily develop applications for this new emerging market of wearable devices?

Unfortunately, due to the huge variance in devices, their differing levels of capabilities, and the lack of maturity in the market, the answer isn’t so simple. We can start here though: most (but not all) of these devices feature the ability to render web content.

For some wearable devices, it’s simple to develop an app using web technologies. For instance, a basic Sencha Touch app appears to render fine on a Tizen-powered Samsung Gear S device, but the same app can’t be deployed to an Apple Watch due to the complete absence of a webview on that device.

Clearly, web apps are a good place to start when targeting wearable devices, but there are still many questions, and it’s not straightforward right now to develop an app that runs across all wearable devices.

I will be covering a lot of these questions and offering my thoughts in my session at O’Reilly Fluent Conference, San Francisco, April 20-22, 2015.

My session will highlight some ways to start developing web apps for wearable devices, look at the current limitations, available SDKs, the special considerations required for app development on such small devices, and the various capabilities that can be leveraged by using web technologies.